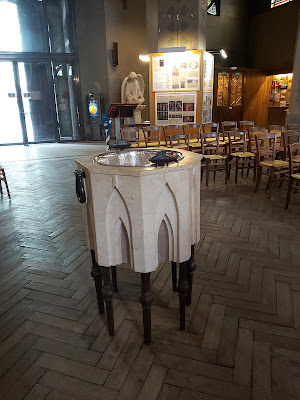 Art Nouveau church at Montmartre, built at the end of the 19th century. They started building it using modern reinforced concrete without getting the proper permission, were ordered to demolish it , but didn''t. First religious building to be built in concrete. Information in French Information in English Information in Piemontese A memorial to the architect
Enregistrer un commentaire
Lire la suite 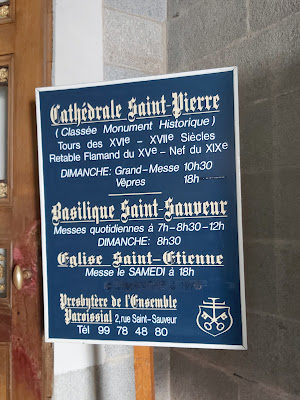 Information in English https://en.wikipedia.org/wiki/Rennes_Cathedral  Information in basque  https://eu.wikipedia.org/wiki/Rennesko_katedrala Great marble pillars! You can also see a recently restored Flemish altarpiece in intricately carved wood. I was particularly interested to see that the altar piece showed both the Dormition of the Virgin Mary and the Assumption of the Virgin Mary. Now, I was brought up as a Catholic in England and I don't remember anyone telling us about dormition, it was all Assumption. I came across dormition in Orthodox churches later, and I always assumed that it was a doctrinal difference with the Orthodox bunch. But, although other churches put a lot more emphasis on dormition than Catholics do, it is not actually a doctrinal difference at all, as the man from the site  https://decoder-eglises-chateaux.fr/  kindly explained  to me. Dormition - the lady died; assumption: her body was taken up into heaven, rather than left to the destiny of other mortal
Enregistrer un commentaire
Lire la suite 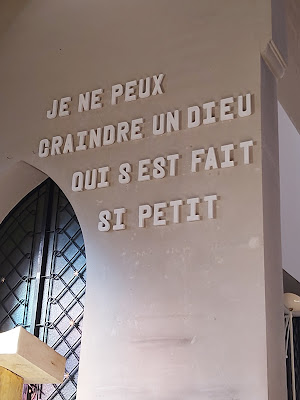 One more from the suburbs of Dunkirk. We will be getting back to Paris, but it seems easier to find time to visit churches when I am away from home. Again, I liked the stations of the cross, and the baptismal font, as well as the cross suspended in the air. I also include a couple of snaps of the bulletin board, because churches are places people do things and organize things (concerning which I am generally a curious outsider).
Enregistrer un commentaire
Lire la suite
Autres articles